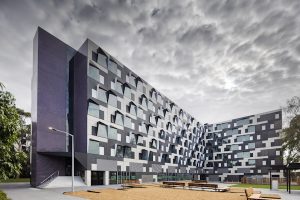 The precinct consists of four new residential buildings with associated retail and informal learning spaces, with each of the buildings having its own individual architectural style. 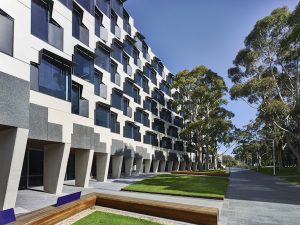 Central to the design are the powder coated aluminium elements featured across each of the buildings, ranging from sharp blacks and silvers on one building through to bright and exuberant colours on another, driving home the individuality of each designer. 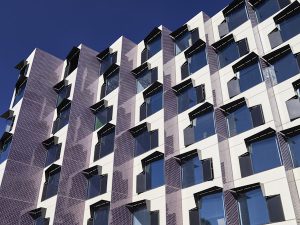 Among the award-winning designs, the Logan Hall residency, designed by McBride Charles Ryan was recognised by the judges for its excellence in architectural skill and merit of design. Interpon Précis™ Black Ink was used for the shading devices and window frames, with Interpon Eternal Silver Satin specified for the weather panels above the ground floor retail.

“As we were conscious of long-term maintenance as well as creating an ongoing pleasing presence, the products used on the project were chosen for their intrinsic beauty and longevity,” says Debbie Ryan of McBride Charles Ryan.

“The pattern is intentionally complex. We have used honest and time-proven Interpon products which have all come together in a really joyful way through composition.”

Having previously worked on the colourful The Icon apartment complex in St Kilda designed by JCB, Interpon’s Specification Expert Gareth Connell understands the importance of tailored palette when vibrancy and colour are central to a project. 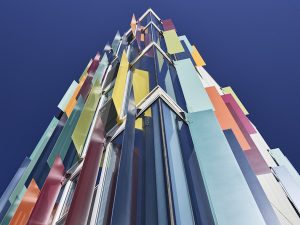 “We knew the design brief called for an exuberant range of colours for a wide range of building elements and performance of this aesthetic. We knew we’d have a proven high-performance finishing solution that would maintain the performance requirements for such a high profile project, which is why Interpon D2015 Ultra Durable polyester powder coat was specified.”

In contrast to the more ‘simple’ colour scheme used for Logan Hall, the Turner Hall building, designed by JCB, is defined by its bright colours, using a rainbow of ten different colours from the Interpon colour palette to create a vibrant and refreshing appearance that has revitalised the University as a whole, traditionally known for its dull brown buildings.

A coloured ‘hood’ at the window of each sole occupant studio glows at night, enhancing the colour spectrum. Custom colours from the Interpon Ultriva™ collection were used for aluminium elements including extrusions, sheets, flashings, cladding, trims and fins. 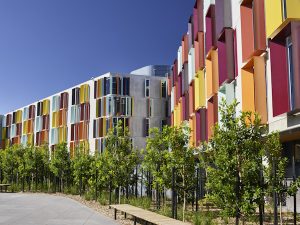 The complexities of the ambitious project required careful consideration and planning between the architects and powder coating supplier. The vibrant design brief lent itself to Interpon’s unique small batching facilities in Sunshine, Melbourne, that cater for such striking colour schemes in a cost-effective and timely manner.

Throughout the project, specialists from Interpon Powder Coatings worked closely with the multiple architectural teams involved in the project to ensure the perfect colour palette was developed for the best results both in individual building design and the project as a whole.